Syria Today – Part III My Family (the other half of it)

This is my sister, Julia, the one in the middle. She has five children, three girls and two boys. Her daughters married and moved away years ago but her two sons are sticking around (so far).

Julia, with the heart of gold.

My dad says, “qalba dihab” (heart of gold), when he talks about Julia, and it’s true. She is such a sweetheart. She’s an exemplary Syrian mother, cooking and cleaning, anticipating the needs of her family, and working for the good of her family with a smile on her face. She loves her husband, children, and grandchildren and it shows! It’s clear they love her too, if their phone calls and visits are any indication. Her daughters call every day or so, keeping her up to date on their lives. Her oldest son, Antoun, lives down the street with his wife and three kids, and her youngest son, (and the baby of the family), Eddy, lives at home with his mom and dad. He’s engaged to be married – more on that later.

Julia and I spent a lot of time together in the village and in Homs. We like to sit and talk together or just be together. She is a great cook (I’m so lucky, everyone who cooks for me in Syria is a great cook!) and we had some pretty great meals while I was there. Additionally, she sent me home with her homemade za’atar blend, dibs ramaan (pomegranate molasses), and hand-dried sumac. She also sent a bottle of arak (anisette liquor) for my husband – she knows the way to her brother-in-law’s heart! She loves that I do yoga and is always telling her friends about it.

Her husband, Bashur, is a kind and gentle man. He loves Syria fiercely. The war has been very hard on him because of this. He ran his own laundry in Homs. The front, corner bedroom was converted to the business years ago. He did the laundry in the back of the house and outside in a shed on the back patio, then pressed clothes, hung them, and met with customers in the front room. In the village, there is no business, so he is retired.

I have never met anyone in Syria who knows as much about history as Bashur. You can ask him anything and he knows the answer. Not just about Syria, but the Middle East as well. His dedication and love for his country is something I admire so much about him.

My nephew, Antoun, is a driver. He takes people all over the valley and to Homs. He also drove me to Tartous and Baniyas while I was there. When I went to Baniyas, I went with him, his wife, and their three kids, as well as Eddy, and Eddy’s fiancée, Merna (whom I love, love, love!).

Antoun works hard and takes whatever work there is. Sometimes that means he works long hours and sometimes it means he works seven days a week. He is a very reasonable person, and when he talks about serious things, you feel that you trust his judgement because he is so sensible. He is also fiercely dedicated to his family. 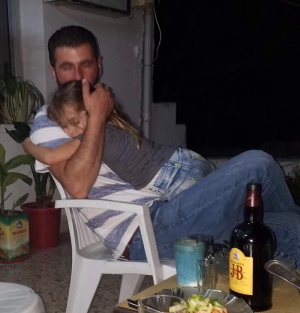 Antoun’s wife, Amal, is literally one of the most beautiful women I’ve ever known (see for yourself). She’s that way on the inside too! She’s fun to hang out with and loves to have a good time. She’s a great mom and wife too. I’ll write about my trip to Baniyas another time and show you lots of pictures, so stay tuned.

Then, there are their kids, Edward (Edoody, 9 years old), Andrew (Andoora, 6 years old), and Naya (4 years old). Edoody acts very grown up for a 9-year old. He is pretty serious. He hates having his picture taken and I’m not sure I have a picture of him. He’s also too addicted to his cell phone games. I just want to say, Syrians have the same problems as Americans when it comes to cell phones! This is a totally universal problem. 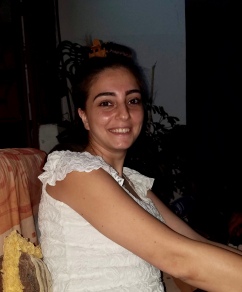 Andoora is a ham! He is so much fun to play with and goof around with. We argue over the right way to pronounce words because his mother is from the Big City (Homs), and my Arabic is “Amar” Arabic with a distinctive accent. “Shoy.” “No, shai,” (rhymes with chai). Shoy. Shai. Shoy. Shai. Also, I taught him and Naya the slap game. You know, when you put your hands on top of someone else’s and they try to slap the top of your hands. They were ridiculously easy to beat. One of the many reasons I love hanging out with kids – I almost always win! 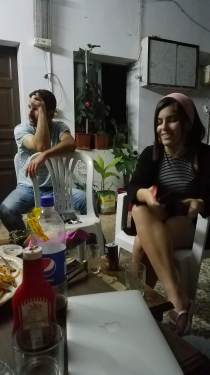 Hanging out with friends. 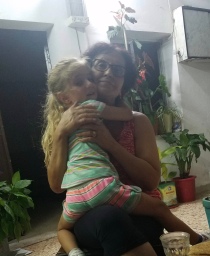 Merna is the cutest!

Naya is a little sweetheart who’s super sassy! She was really excited to start school in the fall and gave me a little fashion show of her school clothes and showed me her new backpack. It’s great to see kids excited about school!

So, about Eddy and Merna. Merna is Eddy’s fiancée and I’m so happy for them. I think they are just perfect for each other! Eddy is a painter. That is, he’s a house painter. There’s lots of work in the area now. There is a lot of rebuilding going on, but also just a lot of building in general. 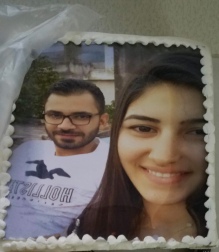 Many people have moved into this area since the beginning of the war. It is free of terrorists and fighting. Of course, now, most of the country is, but the valley was cleared of terrorists back in 2015 or so, while there was still active fighting in other parts of Syria. So, of course, people left areas where there was fighting, and many came to our area. Especially Christians.

We live in an area called “Wadi Al Nasara” (Valley of the Christians).” There are many Muslims in the area as well, but with a large Christian population, many Christians from all over the country came here to escape opposition-held areas where they instituted strict shari’a law and threatened and harassed Christians. So anyway, the point is, there’s a lot of work for builders, painters, tile setters, etc. This is great for Eddy! 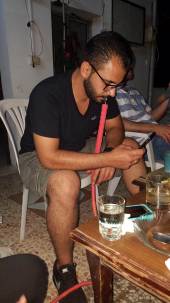 Lifting his glass to me. 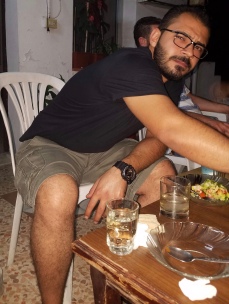 This is the face I love!

I love Eddy because he is a tough guy on the outside, but full of deep love for the people he loves. He’s quiet, smart, and really, really funny in a clever way. Merna is his equal, which is really important. Eddy is so strong, he needs a strong woman. Hopefully, they are getting married next summer. We all love Eddy so much that my son and daughter and I are absolutely determined to go back for the wedding. I’m so grateful for all the nights I got to spend hanging out with Eddy and Merna and their friends this year.

Wow! It takes a lot of words to tell you about my family. And think, that’s just the family I have living in Syria! Next time, I’ll tell you all about Homs.

I am a wife and mother. I am an Orthodox Christian. I am a Syrian American with family living in Syria. I am a also a yoga teacher and freelance writer. I recently described myself in a job pitch as "a person who's lived in Portland, Oregon for over 20 years with a passion for writing and a passion for all things Portland. I'm a foodie, knitter, wine and beer lover, bee-keeper (yep, I said it), mead and fruit-liqueur maker, organic gardener, home-canner, hiker, biker, runner, and occasional skinny-dipper. I’ve camped all over the state, I sail a sailboat that’s moored on the Columbia (o.k., I'm the first mate), and I spend a large percentage of my time at our beach house in Seaside." That about sums it up.
View all posts by LeilaPiazza →
This entry was posted in family, Syria, Travel and tagged amar al hosn, family, Syria, syria news, syria today. Bookmark the permalink.

World Traveling Soulmates. Finding ways to explore the world one magical place at a time.

THE ONENESS of HUMANITY

"It is the duty of every man, as far as his ability extends, to detect and expose delusion and error"..Thomas Paine